Start Here About Me Connect With Me Blog Login

3 Fears That Sabotage Your Dreams Part 1 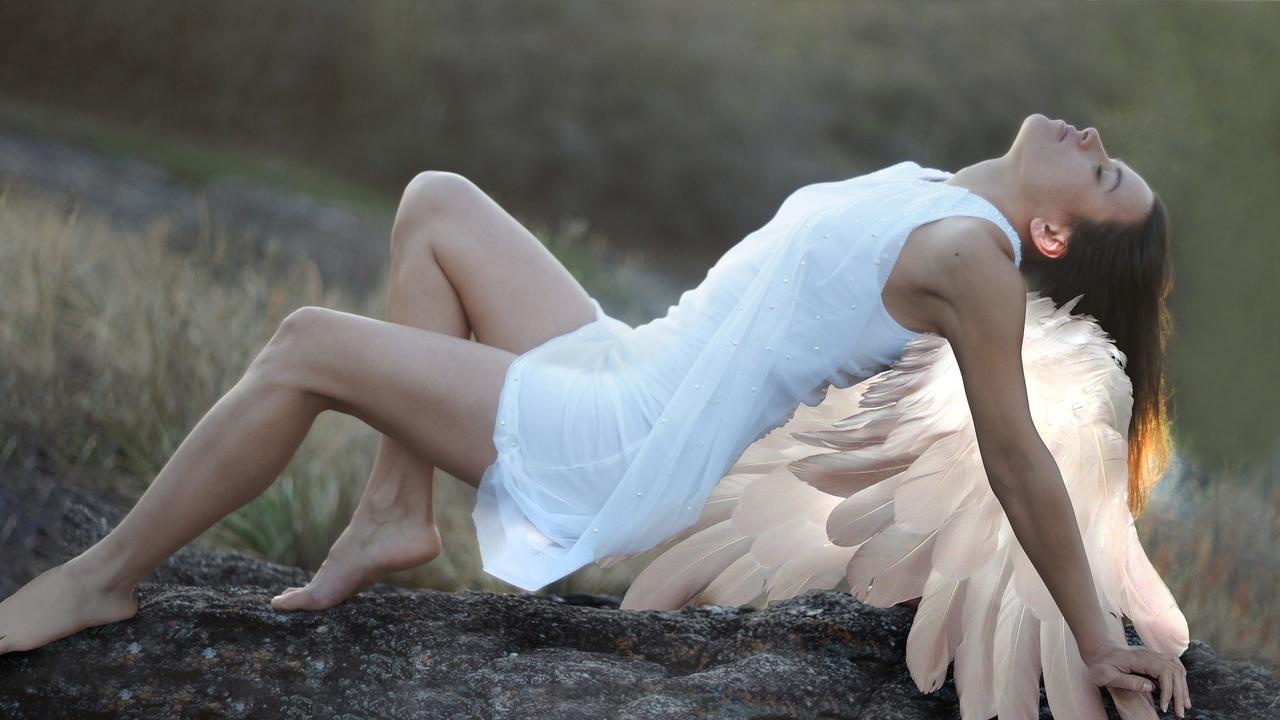 “In between here, the person that you have always been, and here, the person that you know you must someday become, lies a vast, wild, dangerous, unexplored territory that you are going to have to figure out how to navigate safely.The only way I’ve seen anyone get from here to there with their dignity, and their soul, and their perspective intact,is when they decide to regard that journey as a great and epic quest…as the single most important mission of their life. Once you cross that barrier into the new, you can never go back.” ~Elizabeth Gilbert

Have you ever been presented with a massive opportunity (or Heavenly directive!) for change, but you couldn’t bring yourself to go through with it? (Or perhaps you did go through with it and in that case I would love to hear more in the comments about the outcome). You are not alone! This is the epic battle of being human with divine-spark potential. It’s that age-old battle of fear, wrestling our demons in the wilderness while waiting for angels to show up and attend to us! It is also the entire point of the “faith journey,” the journey of so many movers and shakers of history similar to those many are familiar with in the Bible (Abraham, Joseph, Esther, David, Mary). Did you realize we all have the same opportunities to live such expansive lives if we dare say "yes" when the Voice comes calling?
In these times, faith for me is defined as the belief in a Benevolent Transcendent Intelligence that is fully committed to my transformation journey...and the ability to live in uncertainty while I am navigating a new story.
There’s an old adage, nothing risked, nothing gained. When we are faced with those potentially life-altering invitations, why do we fear risk so much? When we are handed a vision of greatness for our lives, why do we shrink back into an often unexplored resistance?
In the next three blog entries, we’re going to look at three major fears that keep us from massive transformation in our lives. I’m going to offer examples from my own experience when I did say “yes” to the Divine Will, and did not miss out. (Major FOMO over here!) These examples are from when I somehow decided to face my fears head on and jump into the unknown murky sea of invitation. I mean, we all know what faithlessness and giving into fear looks like—very intimately. And unfortunately, when we make a choice to put fear ahead of faith, we don’t know what all we missed out on. But I can give you a few beautiful examples from my own life when I barely had the courage to whisper yes, and how it all panned out. 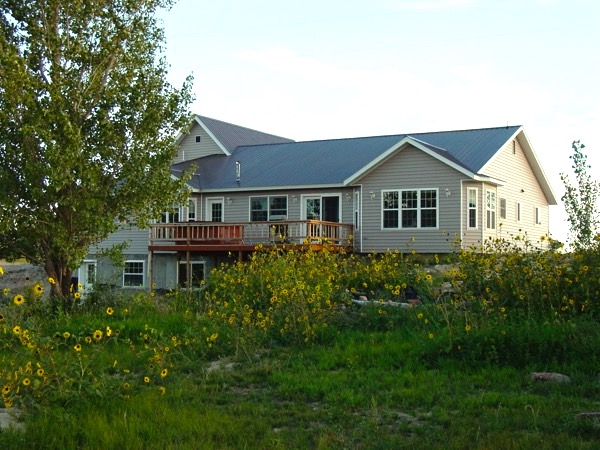 Fear #1: Loss (giving up too much). I remember in 2006 when my husband and I had just built our first home together in the country, complete with three years of sweat equity. We put everything we had into building that home—financially, mentally, and physically. We often said, we gave it the best we had because we thought we were building it for ourselves.
There was a day we worked in the yard, finishing the last back-breaking work three years in (raking and moving thousands of pounds of rocks out of the soil to plant a lawn), when we leaned over rakes for a break. Our discussion took an odd turn and we learned that we both, simultaneously, were having the same premonition that we were supposed to start detaching from the home. It was the strangest feeling—and even stranger that we were silently and independently having the same thoughts.
A couple months later, I was on my first ever medical mission trip as the resident promotional writer for Hopegivers International. We had taken a group into one of the poorest regions of Haiti to bring medical supplies and nurses to an orphanage that had sent out pleas for help on their website. It was a total fluke that I was able to accompany this group as I knew nothing about the organization but a mutual friend of the organization had recommended me. We spent five of the longest days of my life, loving on kids with TB, head lice, and absolute malnutrition in the worst conditions I had ever seen.
On the flight home, I was journaling and praying, and a still small yet powerful voice said to my heart, “your home was never for you, it was for them.” I knew very strongly that I was being asked to give up our home to offer assistance to these orphans in Haiti who could barely eat. It was the most persuasive inner dialog I had ever had up to that point, and there was no mistaking the source.
I wrote a letter to my husband on the airplane, detailing the voice and all that had happened to me over the week, telling him that I thought we were supposed to give up our house for orphans. When I got home and got settled, I handed off the letter to his curious gaze. Any rational husband would have institutionalized me. But he read it, and with tears in his eyes, he agreed that this was what we needed to do! 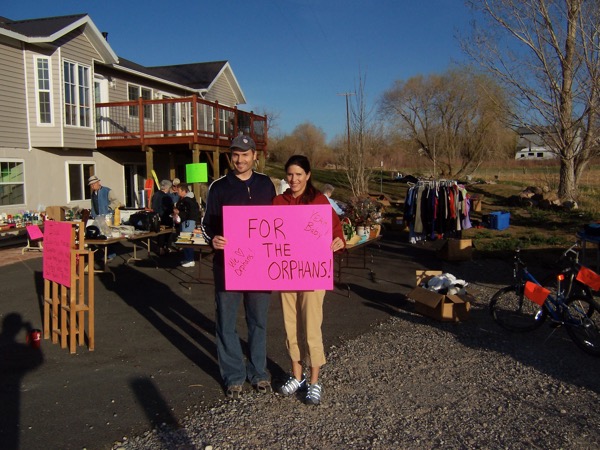 I want you to know, as we were being invited to such a huge sacrifice, we had so many things along the way that reassured us we were doing the right thing. We really never doubted because the signs were so strong. We decided to hold a garage sale immediately to get rid of excess and after that we were going to list the house. We never got that far. Someone at the garage sale found out we were selling and put in an acceptable offer right then and there. With all the sweat equity, we were able to purchase an orphanage building for Haiti, and there was plenty left over to contribute to several orphan efforts going on in India through the same organization. 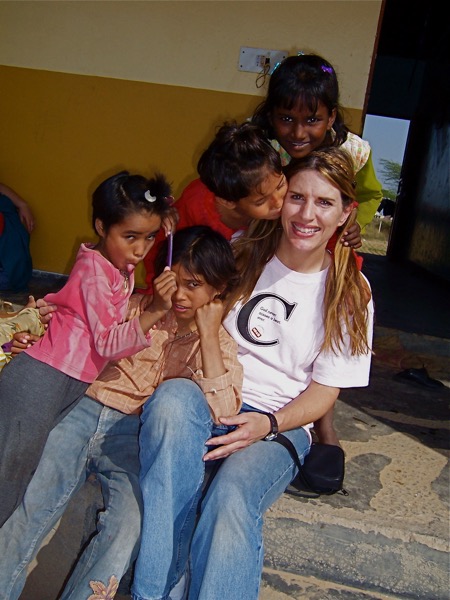 The outcome for this level of faith and listening to our inner Voice was exponential! It opened up a huge trajectory in our lives that completely transformed our future. Had we given into fear of loss or fear of too high of a cost, we would have missed out on my getting to go on staff with Hopegivers for the next two years, which included several trips to India where I first met Abraham Thomas (“Papa" to thousands of orphans across India). Meeting Papa alone was worth all of it. He was the most loving, faith-filled, kind-hearted, generous, inspiring person I have ever met. I ended up with the once in a lifetime privilege of writing his biography before he died in 2010, Hands that Hold the World, which is a life full of incredible miracles of a life well-lived. One interesting synchronicity in this story is that Papa was called from his home in southern India to start missionary work in northern India. He set out for this work with his wife on a March 23, which is my birthday! I also got the chance to write One Million Arrows (my second book), a visionary call based on Papa’s vision for parents.
Beyond that, selling our house set us on a course that ultimately led to my husband and I moving to Idaho, where I got into nursing (more on that in episode 3), and now where I’m at today, writing to you from the mountains of Puerto Rico. I mean, all of those components had to be there in place for this to be happening today, and we love all the places that one decision took us, costly though it was! 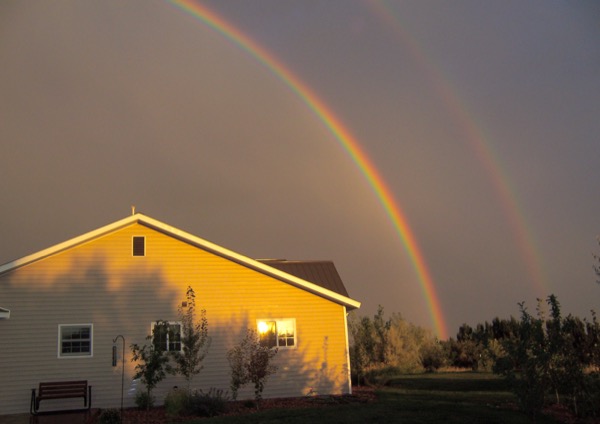 One last important component to this story…on our last day before we moved out, we went for a walk around our neighborhood. It was raining, and we were feeling a little bit of grief over saying goodbye to our beautiful home and also quite a bit of uncertainty about our future. Our tears mixed with the tears of heaven. We prayed together on that walk, asking God to always promise to take care of us. We were giving up all of our equity and had nothing left to show for it. At at time in life when most people were getting comfortable in mid life assets and thinking about getting set up financially for the future, we had just put ourselves back at ground zero with no way to consider investing in another home anytime soon. 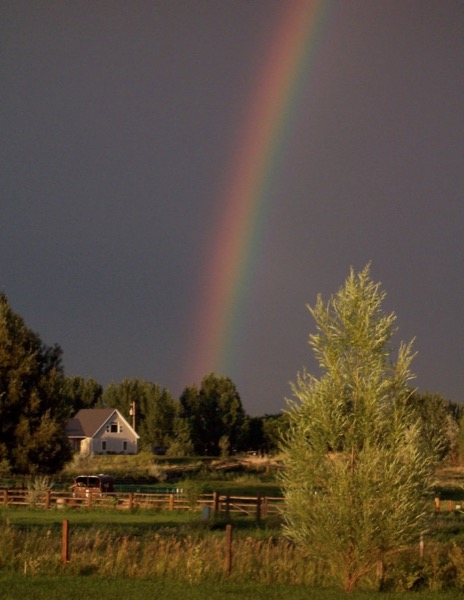 Just then, we rounded the corner for home, and there was the most vivid double rainbow perfectly framing our house! It was the closest, most epic rainbow we had ever seen. And we knew it was just for us, to reassure that Heaven had our backs.
I will say that on the topic of finances, we struggled for a couple of years to make ends meet because I had to give up my paid job of writing professionally for Christian magazines, teen publications, and websites. However, God has led us into very spacious places and has always provided for all of our needs over abundantly! When we felt led to move to north Idaho, we rolled into a very depressed economy and we were able to scrape together enough for a down payment on a cute Victorian house (cheap foreclosure!) in Sandpoint with my dad’s help in giving us a loan and cashing in some retirement money. The market began to turn around shortly thereafter and we were able to play it for awhile, buying low and selling higher until we ended up where we are at today. 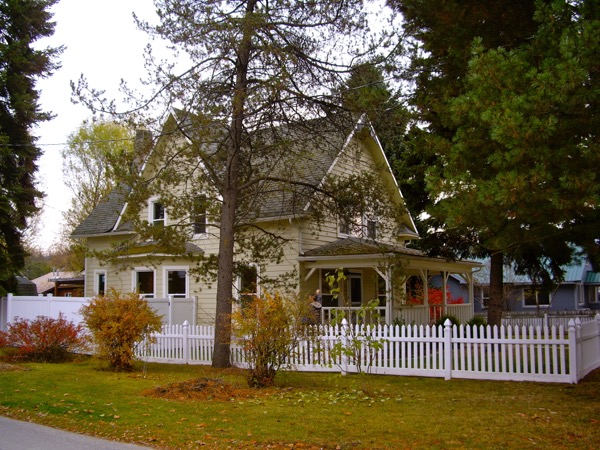 This year, we were able to pay cash for our new 36 acre mountain farm in Puerto Rico. And do you know, the purchase price of our PR farm, I realized later, is exactly to the dollar the cost that we paid to build the first home that we sold for orphans!
So you see, the loss involved in not heeding the Voice when it comes calling, asking you to give up something you love in favor of something so much more wild, seemingly reckless (our friends and family thought we were bonkers!) adventurous, and better for your becoming process, is infinitely more costly! This is often the beginning of the magic or the “epic quest” of an extraordinary life. We only have one shot at this particular experience of life here and now. What are we going to do with it? What do we have that is worth holding onto to miss out on something epically so much better?
I would love to hear your thoughts, struggles, or even great stories of when you went through something similar! Comment below!

If you've been enjoying my blog, subscribe to receive my free 8 Transformational Strategies PDF guide.